Show Me Your Etching, and I'll Buy It

I received the new issue of GD USA in the mail (Naw, in my shoe!), and on the cover is an illustration by Menz titled Gal. It's a quirky pic by a young Chinese artist (this issue is advertising the 3030 New Graphic Design in China book, about 30 artists under 30 in China), and the lines are slightly fuzzy, giving warmth, reminiscent of Al Hirchsfield. So, I saw bravah, but coming out of her stomach is something like goo, and she has a plug(?) where her belly button is. In the end, it was nice. 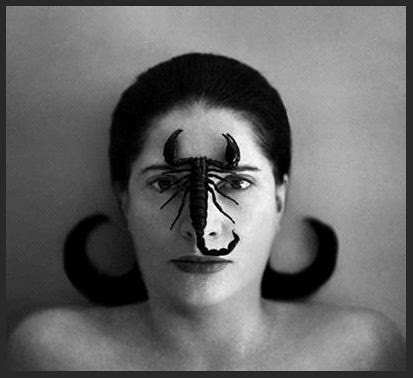 But, this reminds me of yesterday's delightful event; I found Marina Abramović! What am I talking about? Well, about a year ago, I was reading about some of the best performance and installation artists (I went on an illogical journey to find my own path toward installation art from this), and there were several pages on the wonderful Marina Abramović. There were several pieces showcased, and most of them struck a nerve. Now, most of the time, when something strikes a nerve with me, it's in a good way—not like the shooting pain in the funny-bone, but more like Viagra.

What's so exciting about her? If you look her up on Google, you'll get a lot of the Balkan Erotic stuff (you know, because of the 'Net), but it's her other pieces that really tantalize. Marina is studying the condition between the body and the physical (world). Of note, and PG rated, is a piece where she is dress, topless, on a 10 foot-plus ladder, with the skirt of her dress flowing out probably 30 feet. In more startling work, she has cut herself, had orgasms while people walk above her on a platform (not original, but an homage to Vito Acconci's Seedbed (1972)), and re-enacted other works in these same veins, like Action Pants by Varie Export (1969).

So, now I have her name embedded; all I need are some framed memories. And something to perform. Cleaning my toes would count, yes?
Posted by JimCripps at 10:47 PM