To the Moderate, a Toast

Nathan Bransford, over at his blog, posed a question, "Would you still write if you knew you'd never make a cent?" Popular, and intriguing question.

Occasionally I think of this, and ponder till I fall asleep. But I tend to really hover on the excitement of accomplishment and what it brings—the fame. Crazy talk indeed, but if you're going to make it big, you might as well write your fame. Either that, or make the money to buy it. 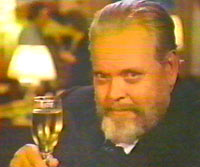 Orson Welles pretty much wrote his own fame. Did a pretty good job of it until people got sick of it, and his bloat.
Posted by JimCripps at 7:13 PM No comments:

Show Me Your Etching, and I'll Buy It

I received the new issue of GD USA in the mail (Naw, in my shoe!), and on the cover is an illustration by Menz titled Gal. It's a quirky pic by a young Chinese artist (this issue is advertising the 3030 New Graphic Design in China book, about 30 artists under 30 in China), and the lines are slightly fuzzy, giving warmth, reminiscent of Al Hirchsfield. So, I saw bravah, but coming out of her stomach is something like goo, and she has a plug(?) where her belly button is. In the end, it was nice. But, this reminds me of yesterday's delightful event; I found Marina Abramović! What am I talking about? Well, about a year ago, I was reading about some of the best performance and installation artists (I went on an illogical journey to find my own path toward installation art from this), and there were several pages on the wonderful Marina Abramović. There were several pieces showcased, and most of them struck a nerve. Now, most of the time, when something strikes a nerve with me, it's in a good way—not like the shooting pain in the funny-bone, but more like Viagra.

What's so exciting about her? If you look her up on Google, you'll get a lot of the Balkan Erotic stuff (you know, because of the 'Net), but it's her other pieces that really tantalize. Marina is studying the condition between the body and the physical (world). Of note, and PG rated, is a piece where she is dress, topless, on a 10 foot-plus ladder, with the skirt of her dress flowing out probably 30 feet. In more startling work, she has cut herself, had orgasms while people walk above her on a platform (not original, but an homage to Vito Acconci's Seedbed (1972)), and re-enacted other works in these same veins, like Action Pants by Varie Export (1969).

So, now I have her name embedded; all I need are some framed memories. And something to perform. Cleaning my toes would count, yes?
Posted by JimCripps at 10:47 PM No comments:

Why Didn't You Call?

At the checkout line in Walmart today, I saw taped to the bottom of the check writing platform, a handwritten, photocopied notice that read,

Or, something like that. I asked the clerk why, and she didn't know. In fact, she told me that no one else knew either. Well, I just looked it up, and I assume that it's a perfunctory action by Walmart so that they will become liable for knowingly sell "fraudulent product:"

Posted by JimCripps at 7:56 PM No comments:

In the Color of My Eye

I am saddened to read that Kodachrome may not be produced any more. Not that I've ever used it, but it's turning into the last samurai, knight of the Round Table, or free Internet; mythological. It produces wonderful color, more so that film we have even today. And what's to keep film manufacturers going with testing/creating new film with the pressing advances of digital? The only thing that they have been working on is the processing of film, from what I can tell, or more directly, film that processes differently. This is assuredly for the processors own benefit—they've got mouths to feed too.

Meanwhile, the erstwhile photographer/artist is left to scrounge for the most equivalent film they can find, going over the edge with quickly expiring film dates, and just doing the best that they can do. Can digital do for us what vibrant, three color processing did for us in the '60s and '70s?

If You've Got the Guns, Shine Them Up for the Show

I'm going to write another essay, about subject close to my heart; U.S. carrier naming. Boring, right? Well, it's really chaffing my hide what the Navy and the government have been doing for the last ten years or so. The essay will most likely be slanted, but I can't help that. The antagonists are very powerful...

Until then, here's this: I am not surprised by HSM 3's producers recent move. They have told the actors to bring their game faces—essentially, "Put up your best theatrical skills." One sweet play by them. What does this mean? My guess, is that it's a money move by the studio (Disney, of course. It is the Wal-Mart of the movie business). Disney most likely acted like this would be just another High School Musical movie, premiering on t.v., and then going to video within a short time. As seen by HSM2, that worked out very well for them, getting the best ratings ever for a premier broadcast of a movie on cable (or air broadcast, I believe). A real ratings winner for them. Disney got top dollar for commercials based on previous ratings and all the hoopla for #1. But what is their next best move? The theaters, of course, the real path to dollars.

There was speculation during casting, that HSM3 might go straight to theaters, but squashing of these rumors was quickly put into play. It was supposed to be another Disney cable movie. So, everybody plays along, signing contracts right away, or holding out, going to the table, asking for more. Of course, Disney knows that any increase in pay over previous installments are mere nickels and dimes compared to the outcome of HSM3. Everybody knows. But, up Disney's sleeve is an ace. After everyone has signed, and pre-production is under way, and all those that need to know come to know, Disney and producers drop the bomb; "We're going big time!" (They're recent announcement is just a hint, or a warm-up. Just you wait and see.)

Now it's too late, almost everyone is locked in at low pay, without leverage. Disney has got a blockbuster for cheap. It certainly won't be a Guys and Dolls, but it will turn out to be a 50 cent Titanic, without the Oscar please.

Nobody Does It Better Than Money

Vacation slipping away, and nothing to show for it. Today would have been my greatest day of accomplishment, writing wise, but there were problems of the four-wheeled kind. That beast is taking nearly half of my paycheck tomorrow, which means that the next two weeks will be lean again. I did manage to do a little web work last night, but it was very frustrating. The log in process is like an Indiana Jones adventure.

I've managed to keep away from JPG.com tonight, mostly, and just trying to enjoy the evening. For certain, I'll be hitting the pages. I might try just using FTP instead of the ferocious web manager.

Netflix is trying to host a movie watching record event in Times Square next month, hoping to set a new record for consecutively watched movies; the record stands at just over five days! The most I've ever watched straight is four movies in a day. Most of the time, I'm just watching t.v. and those nasty commercials like, "I've had to re-use catheters because I can't afford to buy new ones." Ugh.
Posted by JimCripps at 9:24 PM No comments:

A Chain of Confusion

I've been sick since the weekend, but getting better. Damn stomach! Trying to not eat is hard when all I want to do when I'm hungry, is eat! I went to the store, and didn't get Jell-o or yogurt. Dumb me.

Trying hard to get away from JPG.com (see, register, vote! Brownies), and get to writing. If I'm going to get anywhere, I've got to finish new work.

Noticed that there isn't an icon/avatar for me here. I usually use the ole brownies. Maybe I'll repeat that here. Don't know.
Posted by JimCripps at 8:26 PM No comments: